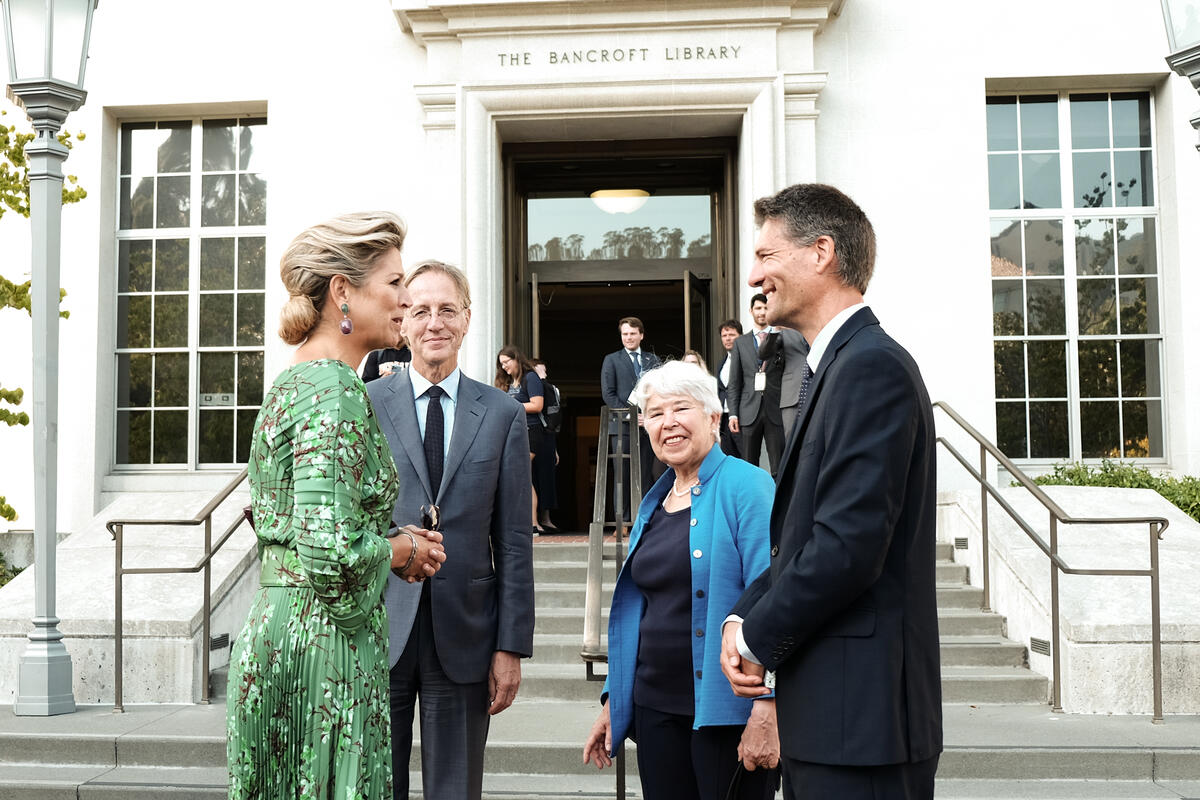 A tradition that began in 1944 of Dutch royalty visiting UC Berkeley continued today with a visit to campus by Her Majesty Queen Máxima of the Netherlands. She was accompanied by Robbert Dijkgraaf, the Dutch minister of education, culture and science, who announced the launch of the Dutch Network for Academics in the United States (DNA-US).

The new network, which aims to facilitate research excellence and knowledge-sharing among Dutch researchers, is the latest partnership between the Netherlands and Berkeley’s world-renowned Dutch Studies Program, the largest and oldest of its kind in the U.S. The royal visit coincided with the 50th anniversary of the program, founded by Berkeley Professor Emeritus Johan Snapper, the campus’s first Queen Beatrix Chair in Dutch Studies. In 1982, Snapper was knighted as an officer in the Order of Orange-Nassau, a civil and military Dutch order whose members have performed longstanding meritorious service to society.

Currently, the Queen Beatrix Chair — named after Queen Beatrix, who in 2013, after 33 years, abdicated the throne that then was ascended by her eldest son, King Willem-Alexander — is held by Berkeley professor Jeroen Dewulf. 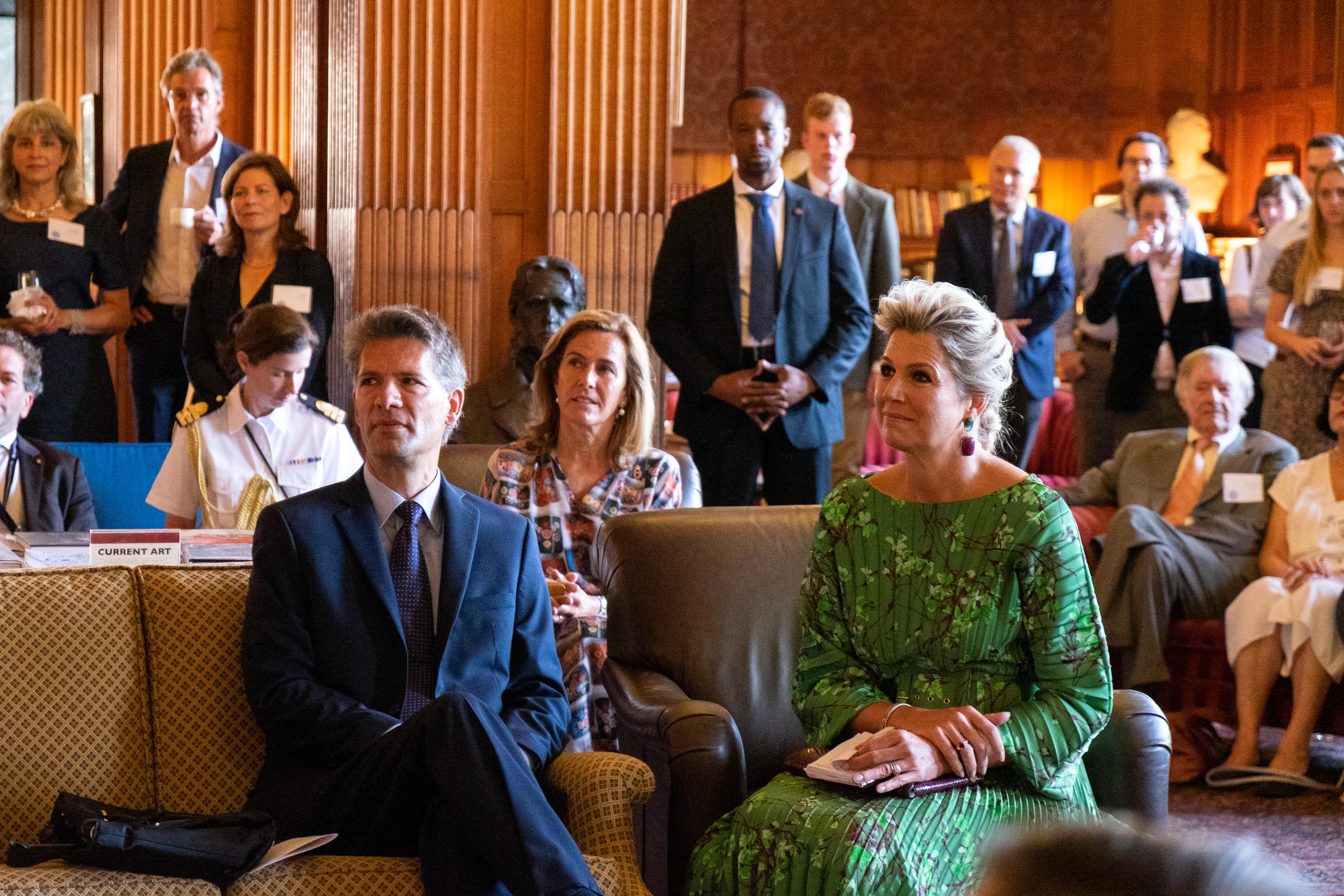 “Her Majesty’s choice of UC Berkeley as the place to launch the Dutch Network for Academics in the USA (DNA-US) with Minister Dijkgraaf is a tremendous honor for our Dutch Studies Program and for the Dutch members of our UC community,” Dewulf said. “Our Dutch and Flemish colleagues across campus — leaders in the fields of astronomy, biology, Middle Eastern languages and cultures, and several more — enrich the overall experience of our students majoring in Dutch studies, and I look forward to continuing these interdisciplinary ties through the DNA-US.”

In 1944, Queen Juliana of the Netherlands visited Berkeley’s Stiles Hall during a trip that coincided with her relocation to Canada during World War II. In 1972, then-Princess Beatrix visited Berkeley to establish the Dutch Studies Program with its founding chair, Professor Emeritus Johan Snapper, and returned 10 years later as queen to rename the chair from the Princess Beatrix Chair in Dutch Studies to the Queen Beatrix Chair in Dutch Studies.

Continuing a tradition of academic inquiry and exchange, the launch of DNA-US at Berkeley strengthens that historic relationship.

Chancellor Carol Christ and Dewulf greeted Queen Máxima today beneath the Campanile, then walked along the Campanile Esplanade with Dijkgraaf to the event, which was held inside iconic Morrison Library. 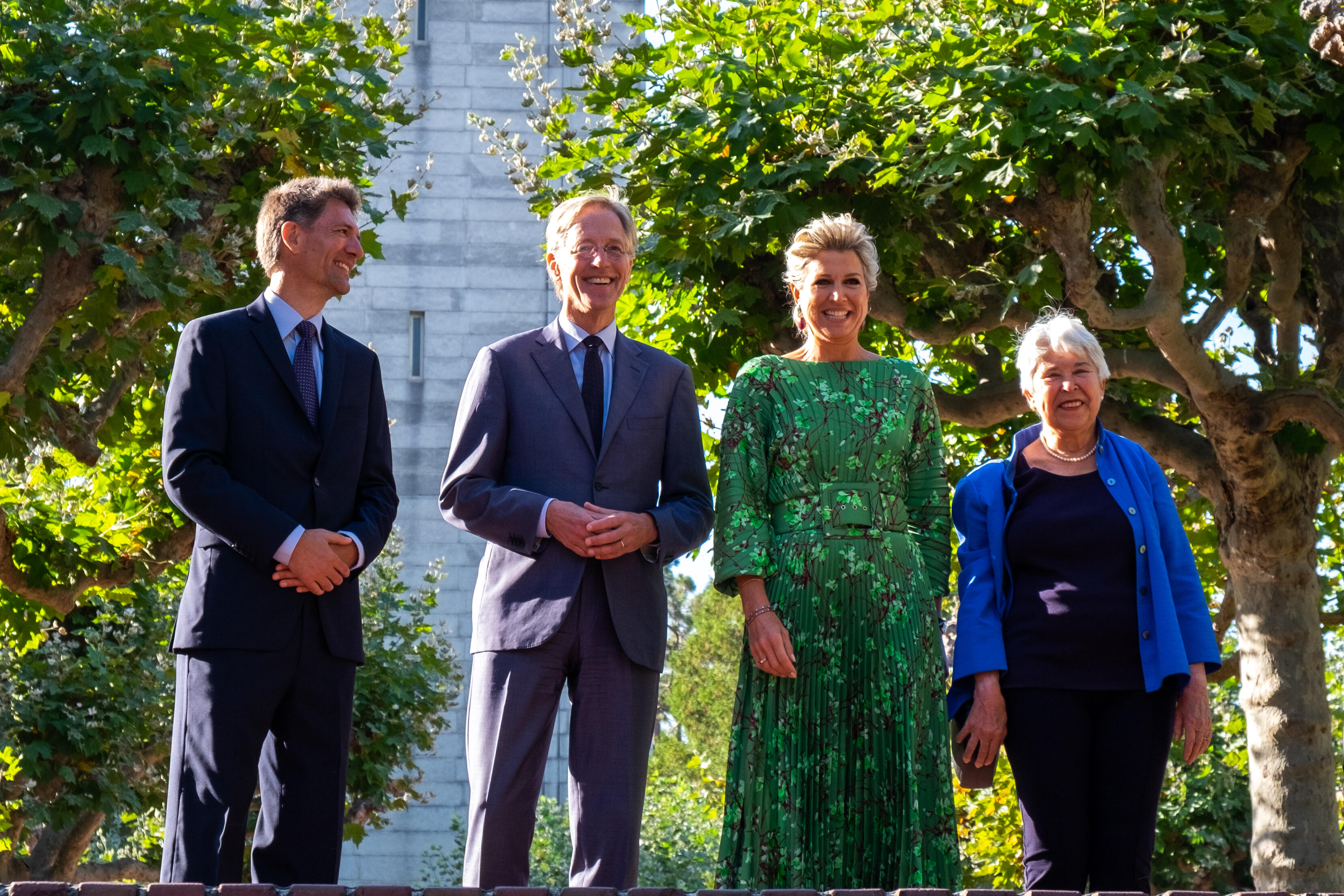 The chancellor opened the event by welcoming the queen, saying,  “It is a distinct honor and pleasure to welcome Her Majesty Queen Máxima of the Netherlands to the Berkeley campus. … It is also wonderfully serendipitous that this visit coincides with the 50th anniversary of our Dutch Studies Program.”

Dijkgraaf spoke to the group about the importance of global research partnerships and exchanges, emphasizing the contributions made by scholars in the Netherlands and around the world. “With the launch of the DNA-US today,” he said, “we hope to celebrate and strengthen this strong friendship between our nations and our scholars.”

Joined by the DNA-US board members Guido Imbens, a Stanford University professor and Nobel Laureate, and Renske Heemskerk, science and education attaché at the Embassy of the Netherlands in Washington, D.C., Dijkgraaf announced the association and revealed the new DNA-US logo to officially launch the resource for global thought leaders. 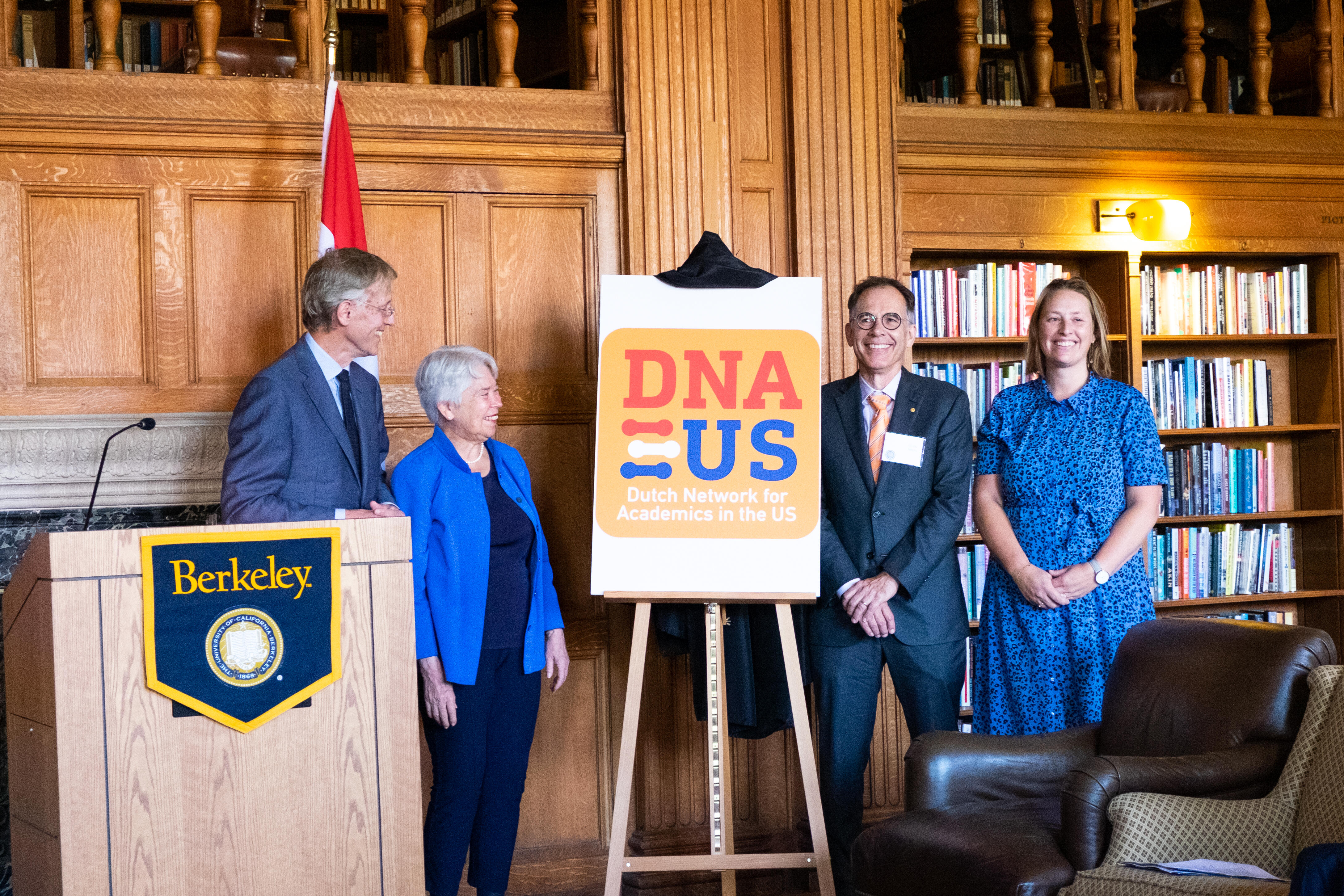 After the ceremony, current students in the Dutch Studies Program, faculty members and campus leaders joined the queen and Dijkgraaf around two tables in Morrison Library to discuss recent research in Dutch studies.

“When the queen and minister requested to meet our students, I imagined (these students) in the far future as alumni, retelling this story to their own students and families as a memorable day in their unique Berkeley experience,” Dewulf said.

A Dutch language student herself, the queen was born in Buenos Aires, Argentina, and was fluent in Spanish and English before meeting His Majesty King Willem-Alexander. Her embrace of the Dutch language facilitated her involvement in social and political causes, especially LGBTQ+ rights and support of immigrants. Today, she is known as one of Europe’s most recognizable and cherished monarchs.

Housed within the Department of German in the Division of Arts and Humanities, Berkeley’s Dutch Studies curriculum was introduced in 1966 and supports an undergraduate major and doctoral-designated emphasis. The program is one of only six in the U.S. and is known for its inclusive approach to Dutch studies with an expanded understanding of Dutch language and culture, beyond traditional Netherlands-centered curriculum.

The program is also the first in the nation to have a Flemish chair — the Peter Paul Rubens Chair for Flemish Studies — endowed by the Flemish Community, one of the three institutional communities of Belgium.

“From Spinoza and Rembrandt to 19th century novels and contemporary media theory, key conversations in the humanities and arts have been shaped by Dutch artists, writers, leaders and thinkers. Our Dutch and Flemish studies curriculum reflects the importance of this powerful history and ensures its continued relevance as a source of intellectual inquiry in our present,” said Sara Guyer, dean of Berkeley’s Division of Arts and Humanities. “More than this, recognition by Her Royal Majesty and the minister points to future collaborations and is an unparalleled tribute to our research excellence at Berkeley.” 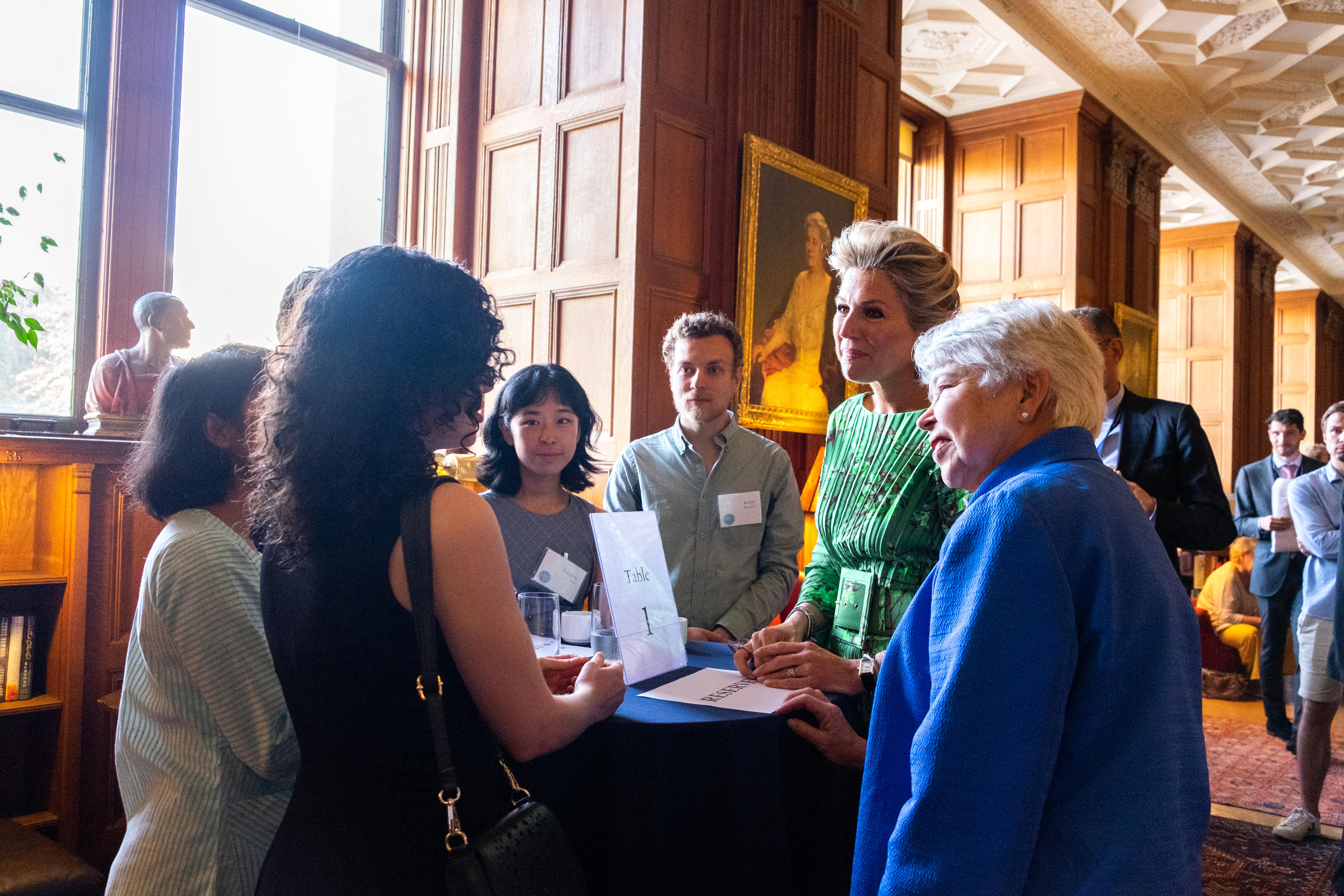 “We thank Her Majesty Queen Máxima for honoring us with her visit and our alumni and friends of Dutch Studies for supporting this program,“ Christ stated in her closing remarks. “We also wish Minister Dijkgraaf the utmost success with the association that was inaugurated here today, and thank you all for your presence and support for Dutch studies at UC Berkeley.”

Stella Kotik and Rebecca Ricksen contributed to this story.