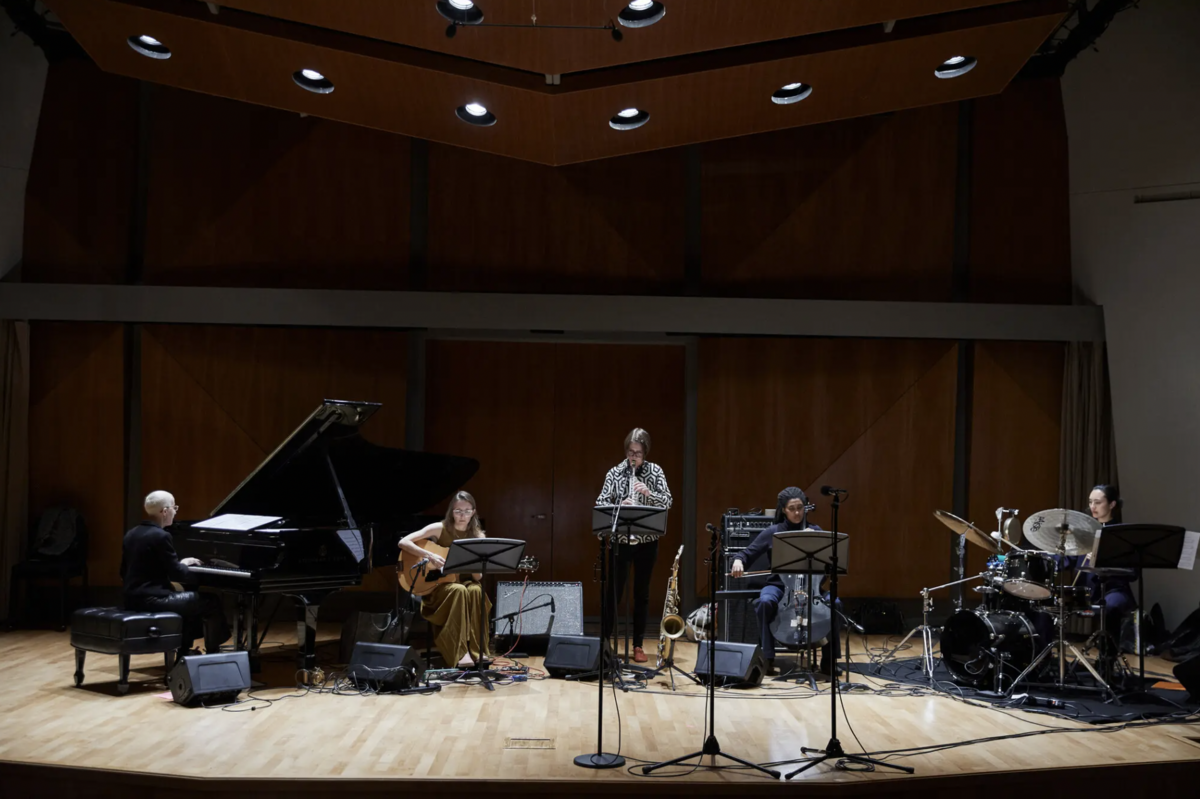 The pianist’s latest group fills its recent album “For the Love of Fire and Water” with idiosyncratic life.

Draft up a list of today’s most inventive and respected players in the realm of what tends to be called improvised music (or creative music or free jazz) and you’ll inevitably name the players in the pianist Myra Melford’s Fire and Water Quintet: the saxophonist Ingrid Laubrock, the guitarist Mary Halvorson, the cellist Tomeka Reid and the percussionist Lesley Mok.

These are restless artists, mostly a generation or so younger than Melford, who have built a collaborative scene and individual legacies in the fertile cracks between improvisation and composition, between jazz and other musics, between the club and the academy — cracks that Melford has spent her 30-plus-year career widening.

“It’s wonderful to play with them,” Melford, 65, said in late October in a video interview from her home in the Bay Area, where she is a professor of Composition and Improvisational Practices at the University of California, Berkeley. In conversation, she pairs thoughtfulness with a peppery exuberance, a mix that reflects her pianism. “Each is such an important individual voice, and I love to hear what discoveries they make.”

Melford thinks of her composing as architectural, as structures to be explored, an approach that seems natural for a musician who grew up in a Frank Lloyd Wright house in Illinois, relishing its curious nooks and crannies. For the Fire and Water Quintet, which comes to Roulette in Brooklyn Monday night to celebrate the release of its album “For the Love of Fire and Water,” Melford provides the structure and the players, together, fill it with idiosyncratic life.

Melford’s respect and admiration for her bandmates is mutual, of course. If it weren’t, crucial elements of improvised music — trust, deep listening, empathetic responsiveness — would prove impossible.

“Myra is a great composer and conceptualist, and her piano playing is fearless and creative,” Laubrock said in an interview. Halvorson noted that she first became aware of Melford in college, and has admired her ever since: “The intensity, clarity and fearlessness of her improvising, plus her ability to integrate the melodic and rhythmic with the textural and experimental seamlessly, has always been an inspiration.”

Mok added, “Working with Myra has given me a framework for how to think about composition, especially when writing for strong improvisers, and how to make simple choices that allow the music to shine.”

Melford’s music draws on a host of influences and traditions, including her mentors Don Pullen and Henry Threadgill, and a variety of global musics: She studied harmonium in Calcutta, spent a year in an upstate ashram and has participated in a cultural exchange program with the Huichol people of Mexico. She celebrates what inspires her — her “Snowy Egret” quintet album from 2015 grew from her reading of Eduardo Galeano’s “Memory of Fire” trilogy — but the music stands alone. (Sadly, Melford confirms that with the death of the trumpeter Ron Miles in March, that band is done.)

“I realized early on that I wanted to synthesize all the ideas or things that have had an impact on me and my life,” Melford said. “But I don’t want to be didactic. I like ambiguity. I want a world of possibilities suggested by the music.”

The release that perhaps best reveals the breadth of her interests and collaborations is “12 From 25,” an album from 2018 that collects performances from shows Melford played with a dozen different ensembles at the Stone during its 2015 celebration of her 25th year of making music. In recent years, trio projects like MZM (with Miya Masaoka and Zeena Parkins) and Tiger Trio (with Nicole Mitchell and Joëlle Léandre) and other collaborations have offered her an expansive palate, a mix of personalities and the chance to make big sounds.

The Fire and Water Quintet is a touch more raw, its elbows sharper, suiting the strengths of the players. Its lineup exemplifies how much more open the jazz-adjacent music world is to women than when Melford first played duets with the flutist Marion Brandis in the mid-1980s.

“I was so used to being the only woman in bands that at a certain point I sort of stopped noticing,” Halvorson said, referring to projects as late as the 2000s. “I do feel that, in this music community at least, there has been a gradual shift in momentum in that regard over the past 20-plus years.”

Jazz critics have long used the term “encounter” to describe musicians playing together. Listen to “For the Love of Fire and Water”and you’ll hear something more like a hyper-creative play date. (On the album, Susie Ibarra plays drums.) Melford composed a suite for improvisers, inspired by a MoMA retrospective of Cy Twombly’s work — abstract art responding to abstract art. It opens with a solo statement, a tart greeting from Melford’s piano, rhythmic pulses and exploratory runs across the keyboard, until Reid’s cello joins in some two minutes later, answering Melford but also pushing someplace new.

At intervals, the rest of the band follows, one at a time, pitching in with what the others are building. Eventually, like a destination appearing out of fog, a lopsided groove emerges: a composed passage the band toys with until suddenly lurching to a stop for more free play, pairing off in duets or trios. Once in a while, they ebb to near silence or boil over into collective noise.

In her teaching at Berkeley, Melford introduces improvisation and complex music to students, telling them it’s OK not to like it, but asking that they at least truly listen. That’s also what she hopes for in an audience. “What’s being made by improvisers, what’s being said, depends as much upon the listener as the players,” she said.

Asked to describe her ideal audience, she responded, “Someone with an open mind and an open heart, with curiosity and a willingness to drop the idea that they’re going to hear an ‘avant-garde’ musician.” (She prefers terms like “creative music,” feeling that “avant-garde” today too often refers to a “genre with expectations and rules rather than an ethos of exploration or surprise.”)

However you might care to classify it, Melford’s music is welcoming, suffused with melody and feeling, rooted in both Monk and Bartok, open to plateaus of contemplative beauty, like the final movement of “For the Love of Fire and Water.” When it does boil over, it brings listeners with it. Or maybe “listeners”is the wrong word. Perhaps they’re explorers.